Sewage fungus is a mass of filamentous bacteria (primarily of the species Sphaerotilus) that grows in response to organic nutrients in the water.  Sewage fungus builds up on almost any surface where there is a flow of water and the necessary nutrients (such as organic wastes form feed and faeces).

How are watercourses affected?

Sewage effluent in the water causes oxygen levels to drop drastically – in more severe cases the river can no longer support invertebrates or fish.  Oxygen levels will increase again once the pollution has been broken down, diluted sufficiently or removed.

Rivers that are severely polluted cannot support any life. As long as the properties that are misconnected carry on discharging waste water via the surface water sewer, the water quality will not improve.

Within two or three days sewage fungus will grow, covering the bed of the watercourse like a blanket, getting thicker the longer the discharge continues.

Sewage fungus will also be thicker if the pollution is more concentrated, such as when flow in streams is lower.
When the discharge stops, the sewage fungus will disappear almost as quickly as it appeared. 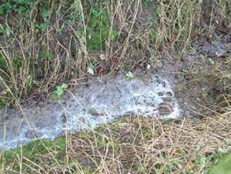 Sewage fungus in a ditch course 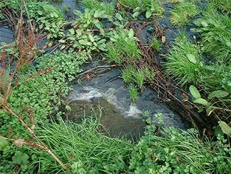 Discharge from a septic tank direct into a ditch 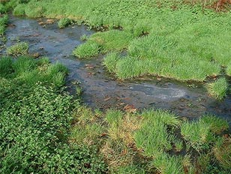 Sewage fungus in liquid on surface of ground (BOD was approx 175mg/l.)

Sewage Fungus is a thick growth of fungi that develops on stagnant water contaminated with sewage effluents. The filamentous fungus host material is composed predominately of the bacterium Sphaerotilus natans. It is most frequently an off white colour and indicates that the sewage has not had secondary treatment. 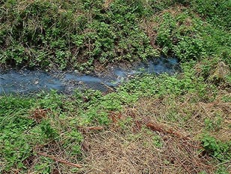 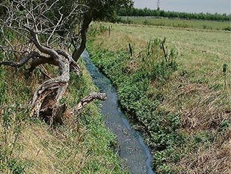 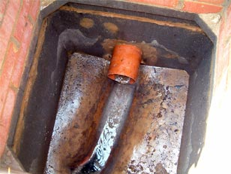